Being a PFS Parent Changed My View of Social Justice
by Jolan Bogdan, PhD

The decision to send my son to PFS was initially very difficult for me, because I come from an academic background, and had no experience with formal alternative education models prior to learning about democratic free schools.

In my own life, I pursued the traditional academic route, getting a terminal humanities degree. I like to make jokes about how terminal degrees really are terminal, haha. After teaching Art History and Critical Theory at the college level for a number of years, I decided to leave academia to have children. By my early 30s, it was clear to me that while I loved teaching, a lifelong career in academia was not enough for me. I wanted something more, and at the time the biggest part of that more was children. 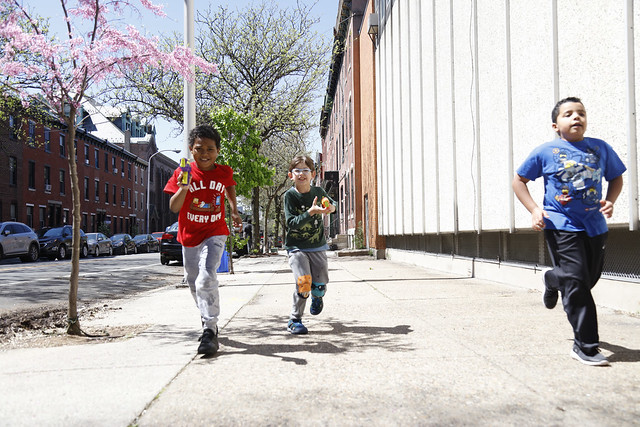 When it came time to find a school for my oldest, I struggled to find one that fit our needs and personalities. Even though I had attended and eventually learned to excel in environments that were based on performance and assessment, I saw early on that my son was not thriving in the school I had enrolled him in. As an educator, I found myself chafing against the rigidity of the curriculum and the arbitrariness (dare I also add absurdity and irrelevance?) of the assessment criteria. As a human being, I found myself chafing against the cultural self-segregation and hegemony of the environment. Having had no first hand experience with or knowledge of alternative schools, I looked to other private schools in the area. One of the reasons I did not consider them initially was because of the price tag. But desperation led me to reconsider, and I visited many of them in an attempt to find an alternative. I was left with the impression, after touring several, that while they encouraged applicants from all income groups and backgrounds, the environments within the schools remained hegemonic and segregated in their atmosphere. PFS stood out not just because of its progressive approach to a real lived learning experience, but because the cultural diversity of the school felt absolutely genuine.

I believe this true, deep cultural diversity is what sets PFS apart from any other school in the region. And the truth of this commitment to diversity came across during the tour, the admissions interview, the trial week… in short, at every single step of the application process; and it has remained true for the past two years that my son has been enrolled there as a student. 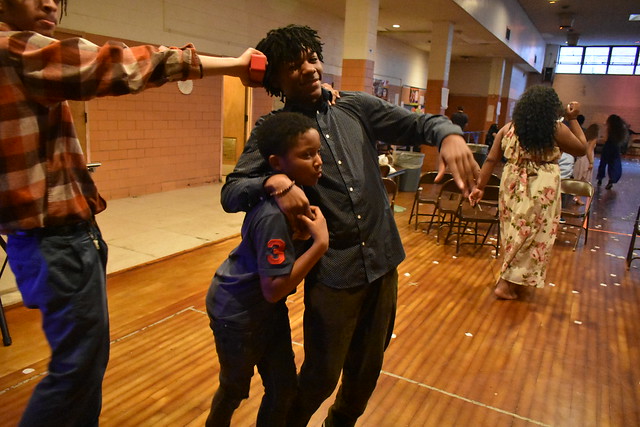 It is no easy task to create true diversity in any institution, and especially when it comes to private schools, the economic challenges are increased. I recently had a conversation at a playground that shed some light for me on how competitiveness and financial ambition thrive in most private school environments, because those are structural components of the schools themselves, and no amount of lip service to “diversity” can reverse that.

“Where does your son go to school?” a mother asks me.

“He’s at the Philly Free School,” I reply.

“Oh, we looked at that one,” she says, “But we didn’t know anyone there at the time, and you know, it’s all about where the families you know are going.” And I wanted to say that we didn’t know anyone there at the beginning either, but held my tongue. She continued, “ We looked at all the other options too, but then won the lottery for a charter, so we just lucked out.” I nod in agreement.

“I didn’t look at any charters, but PFS was really hard for me, because I come from such an academic background.” Now it’s her turn to nod in agreement. We’re doing the dance of establishing our socio-economic positions in relation to each other.

“I did look at other private schools,” I continue.

“But something about them left a weird taste in my mouth.” Here, I’m referring very specifically to economic elitism, but I don’t say that explicitly.

“I liked other schools,” she says, which translates in my mind into her not having an issue with economic elitism. Her next statement confirms my suspicion.

“I really liked [Specific School Name], and we know families there, but they wouldn’t give us a break on tuition at all, and we were like, ugh…” So there, she’s telling me that their income is too high to qualify for a discount on an annual tuition of about $30,000. For me, that really illustrates the diversity problem, because while these schools genuinely want diversity, they also want families who can pay the full price tag, and for these families to maintain the cultural atmosphere of the school, which in the best possible circumstance, comes across as an appearance of diversity. Economic competitiveness is embedded in that experience, and manifests as academic competitiveness among students. 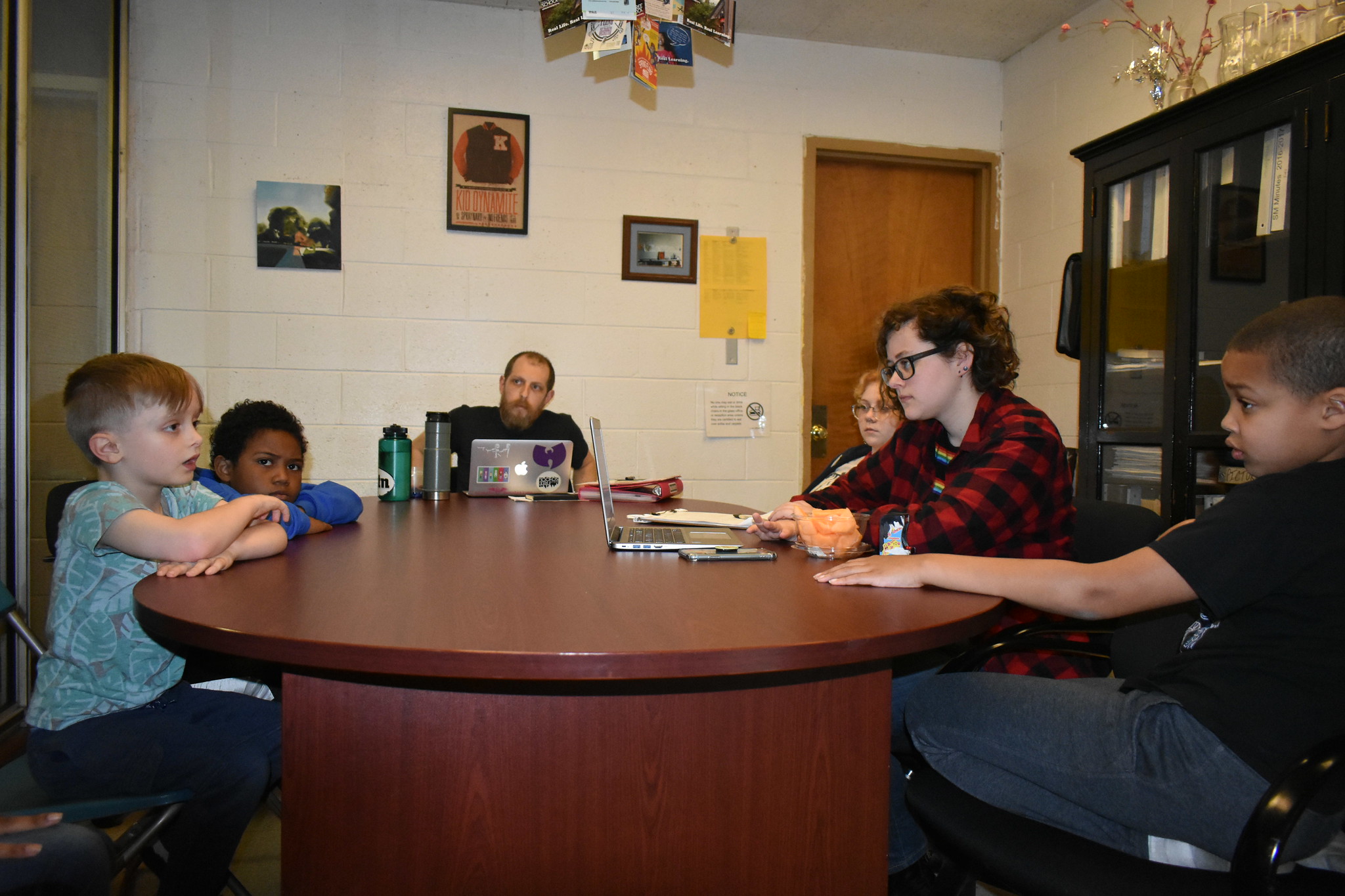 Unlike me, my eight year old son does not analyze and dissect every social situation for its hidden hierarchies and socio-economic constructs. He does not yet see the scope of injustice in the world, nor the structures that keep these injustices in place. As a parent, and as a human, one of the greatest challenges I grapple with is how to structure our day to day lives in such a way that we gradually chip away at these structures of injustice, and replace them with new ones conducive to genuine self-determination for all. Often times, in my personal interactions, these efforts are a bit heavy handed, because the work is messy, and the path is often unclear. But the decision to enroll my child at PFS was not unclear, and it is one of the most comprehensive and rewarding steps we have taken as a family to work towards this broader social goal.

When I first encountered PFS, I began to research democratic free schools with a voracious hunger. It was difficult for me to wrap my head around this truly revolutionary approach to schooling. I was full of questions about college applications and SATs and all the usual concerns that stemmed from my own educational experience. There is a tremendous amount of information available to answer these questions, and PFS has many resources, including books for loan and for sale. I took advantage of all available options, and my research confirmed everything that I ever saw truly working as an educator: namely, that supporting passion and self-direction is the key to deep learning. At the same time, it challenged me, because it took away all those artificial assessment constructs that are the bread and butter of formal education.

Looking back at my own experience, I knew that I performed for the assessments, but my passion and drive lived elsewhere because there was no room for them in the curriculum. I also knew that many of my personal challenges in life came from unlearning rigidity and reimagining situations, stepping outside of conventional norms. At PFS, I see my son thriving and growing into himself, discovering his passions unencumbered by unnecessary interference. He decides each day which toys he will take to school, which activities he will participate in, who he will play with, what he will do. He has the opportunity to learn about consequences because he has the space to make decisions for himself. I watch him grow in confidence and intellectual curiosity every day. 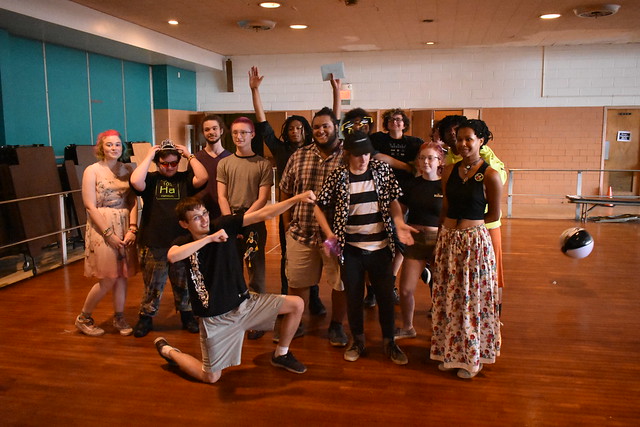 And in addition to this freedom to learn, I know that the environment he is developing in is fundamentally at its very core committed to diversity and inclusion. Many organizations aspire to this goal. PFS truly achieves it. Their diversity is a real diversity. It does not live on the surface. It lives in the depths, and it is viscerally present in every aspect of school culture.

Allow me to digress for a moment with a meandering example: I recently had the privilege of attending a practice defense panel for this year’s graduating seniors. It was an opportunity for students requesting diplomas from the school to provide copies of their thesis to a group of parents and community members, and face questions about their readiness to graduate. This was an informal exercise in preparation for their formal thesis defense panel. I was struck by the depth of thought the thesis submissions reflected. Each of these students were deeply engaged in their world, aware of their interests and motivations, and ready for the next step in the journey of their lives. When I graduated high school, I was not asking these questions of myself, and none of my educators were asking it either. Because I performed well academically, it was automatically assumed that I should go to the “best” university I could get into, and aim for the highest paying career path. All this was assumed, both by others and by myself, so I was deeply struck by the true inquiry and the bravery - and the amount of breathing room - that these graduates had in approaching their lives. Nothing in life is actually a given, nor is success linear and quantifiable, and it took me decades to figure that out. I found myself feeling immensely proud of these students, and also jealous, because they get to explore their ambitions unencumbered by external agendas. It struck me that they were already living in a much more “real” real world than their conventionally educated counterparts. But one of the applicants said something that has stayed with me, and it connects back to my earlier observations about diversity. A young woman of color stood at the podium and reflected on her time at PFS. She talked about a recent experience with police, and contrasted it to her experience with the Judicial Committee. She talked about how she initially did not use JC because she assumed it would be useless, and would not actually aid her or address her concerns. But gradually she began to try it, and was struck by the fact that the “judges” truly were her peers. They often looked and sounded like her, and they heard her concerns, and she saw that the system worked and that she was a part of it, and could trust it and use it to her advantage.

What a miracle, in this day and age, for a school to be conducting such a radical experiment in democracy. It’s so radical, that their members actually experience it as democratic! And what a tragedy that this young woman had to first unlearn the injustice that she experiences from institutions in our free and democratic country. I’m thrilled that a school exists where these are the lessons that students are learning.