One of the ideas that I’ve heard many, many people talk about lately in response to national political trends is the need for children to have a social justice curriculum. I understand why this would concern responsible parents. Right now, on a national level, there is political disregard for women, minorities, the poor, the handicapped, and LGBTQIA individuals, just to name a few distinct groups. It seems that the federal government’s idea of justice is that those with the most power should get whatever they ask for – often at the cost of those minorities. If a minority or other interest group wants something, they should find a way to get in power, otherwise they are losers and are out of luck. The ideals of compromise and balance of power have been lost. The idea that government has a responsibility to take care of all of its citizens seems like something from a bygone era. Many of us put our hope in institutions like the American Civil Liberties Union or the judicial branch of government. Many of us are actively seeking social justice. 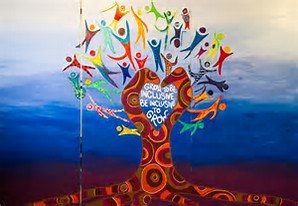 So, yes, it makes sense that we should try to instill this idea in our children. We feel it’s necessary to teach reading, writing and math, so it follows that we should just teach social justice too, in order that a socially just generation might emerge from the ashes of our failure. I think this idea has merit, but I believe it’s also fatally flawed in the same way most educational systems are fatally flawed.

In a school that teaches social justice, one or more adults are going to tell the children that this is something they must do. There will be defined amounts of time where they are tasked with different activities that are designed to bring to light the need for self-respect and respect of others. They’ll learn about different social movements through history, and it will probably all culminate in a big class project aimed at some social action or another. This certainly isn’t all bad, it’s just imperfect.

How can children really know themselves when they are told what they have to do for most of their waking hours? Can a child that consistently scores C’s, or finds it difficult to sit for 6 hours straight love themselves completely? How will they respect others, when their educational system doesn’t truly respect them as individuals? And how will they act when this isn’t a compulsory exercise?

My daughter goes to a democratic school called the Philly Free School. Many parents lately ask me:

Let me explain a little about the school. Children have autonomy. They are allowed to pursue what they would like to learn, much like we as adults are allowed to do this. The school trusts children to make these choices. The children are also tasked with running the school in conjunction with a small group of adult staff members. They are also charged with making and enforcing the rules at the school. Some of the rules that I can think of off the top of my head include no violence, no hate speech, and you cannot infringe on someone’s right to exist peaceably. 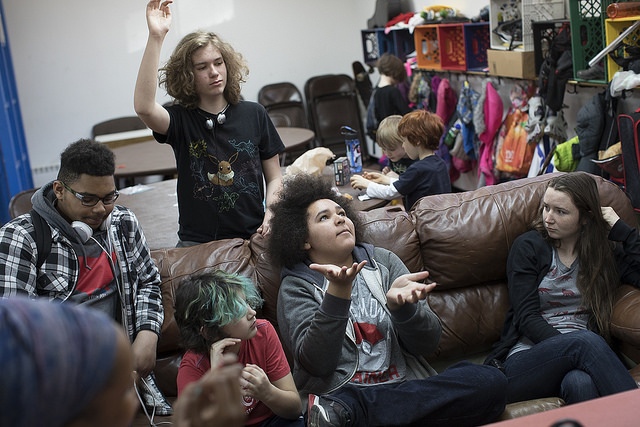 Judicial Committee in action at PFS

For the children at my daughter’s school, they feel strongly about keeping their school environment healthy. People don’t always do the right thing, though, and sometimes lines are crossed. When a rule is broken, a case is brought before the judicial committee. Kids and a staff member listen to the case and decide whether a rule was broken and what the consequences will be. I’ve heard about conversations at judicial committee meetings that have brought tears to my eyes. Children as young as five grapple with what it means to thoughtlessly use words that would offend, or to unintentionally (or sometimes intentionally) infringe on someone else’s rights. Kids from all over the city, from different races, nationalities and ethnicities talk about applying social justice in their own day-to-day school environment. They are not being taught, they are actively engaged in meaningful social justice in their lives.

Through the respect they are given to take the time to find their own path, they learn about themselves and learn to love themselves. They respect others easily, because they’ve likewise been treated with respect. Inevitably, these students become very interested in the ideas of right and wrong, and how justice is and is not applied in the larger world. After the last presidential election, many of the kids at my daughter’s school held a “We the People” series of seminars, where kids from eight to eighteen came up with the idea to each teach about a different civil rights topic. Since these kids have hands-on experience working within a community to bring about change, they readily and voluntarily start to do the same in the wider world. So many of the kids at PFS have been politically active lately, I know that these young people are a force for good that will only grow as they mature. 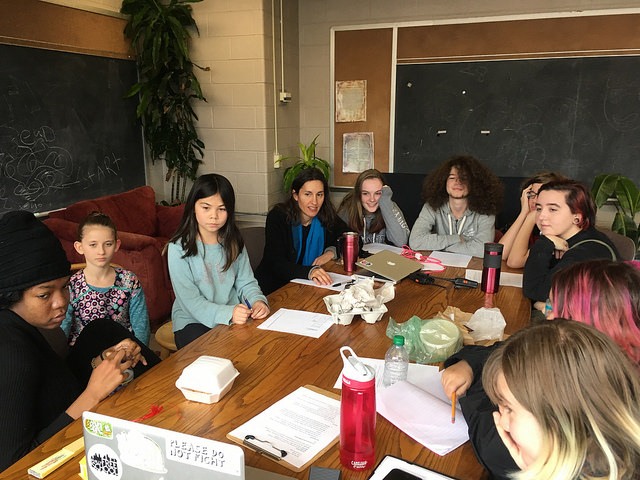 We the People Seminar

So, your questions answered:

So, instead of trying to add social justice to an authoritarian form of education, consider democratic education. Consider letting children take charge instead of adding another structured activity or compulsory piece of education. Consider letting children meaningfully engage in democracy before the age of eighteen. I think it might just be the change we need.